Discover the 1,300 years of History of Nara
Back to Ancient Japan - Rediscover Your Nature in the Old Historic Capital, Nara
Japan has a long history, and Nara indeed imbues with historical significance such as temples, shrines, and gardens, in which many sites have become the designated UNESCO World Heritage Sites. Nara is also easily accessible from both Osaka and Kyoto, which takes less than an hour by train. Visitors usually take a one-day trip to Nara, but it is better worth a 2 to 3-day trip for anyone fascinated with deep Japanese history.

Temple pilgrimage or junrei in Japanese is a long-established tradition of Japan. By visiting multiple temples, it is believed that prayers can build connections with the temple and Buddha, which will bring about divine protection after all. The temple pilgrimage originated in Nara in 718 by the monk of the Hase-dera Temple named Tokudo Jonin. One day, he met the judge of the afterlife, Emma-daio, when he became very ill and was temporarily in a state of suspended animation. At that point, Emma-daio gave him a written vow along with 33 of temple seals and encouraged him to establish 33 of holy Kannon (goddess of mercy) sites for the people who suffer from pains and troubles. After he revived, he found 33 of sacred Kannon sites as accurately as Emma-daio encouraged. However, it was not accepted by the people of that time, and the 33 temple seals were placed in the stone shrine of Nakayama Temple. About 270 years later, the lost Kannon pilgrimage was revived by the emperor Kazan. This is how Japan's oldest Kannon pilgrimage has originated.

Generally, the “Saigoku Kannon 33 Pilgrimage” is about visiting 33 designated temples in Nara, but this “Nara-Yamato Four Temples Pilgrimage” allows visitors to visit the four temples more easily accessible. They are located in the Nara-Yamato province, also known as the "Center of Nation" because it is the birthplace of the imperial ruler and rich in historical sites. 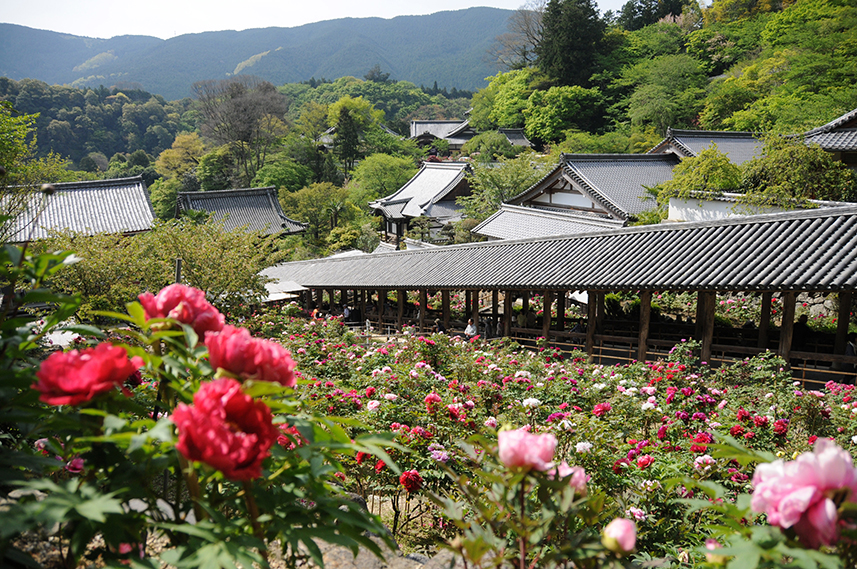 Hase-dera Temple was founded in 686, which is often called “the temple of flowers.” 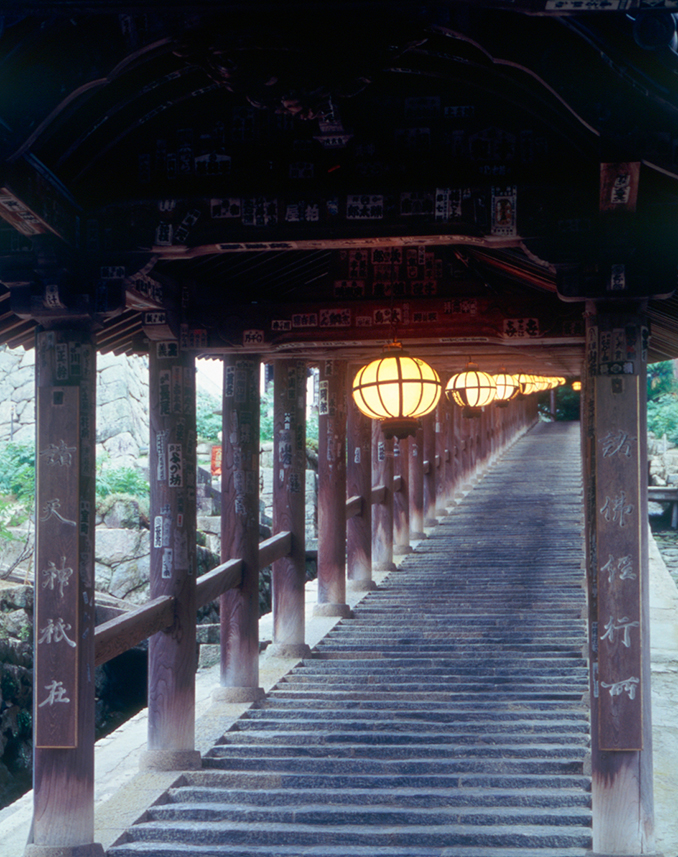 The temple welcomes you with the gate of Deva called Nio-mon, which symbolizes the beginning of life. The temple is perched near the top of a mountain and reached by 399 of the stairways. It is believed that you take the first 108 stairs as you drop your anxiety, and when you arrive at the top, the 400th step, you will finally be able to see the eleven-faced Kannon (goddess of mercy) statue as it symbolizes you reached to "the end of life." This primary Buddha of Hase-dera Temple, the eleven-faced Kannon, is believed to have the power to seal the plague. 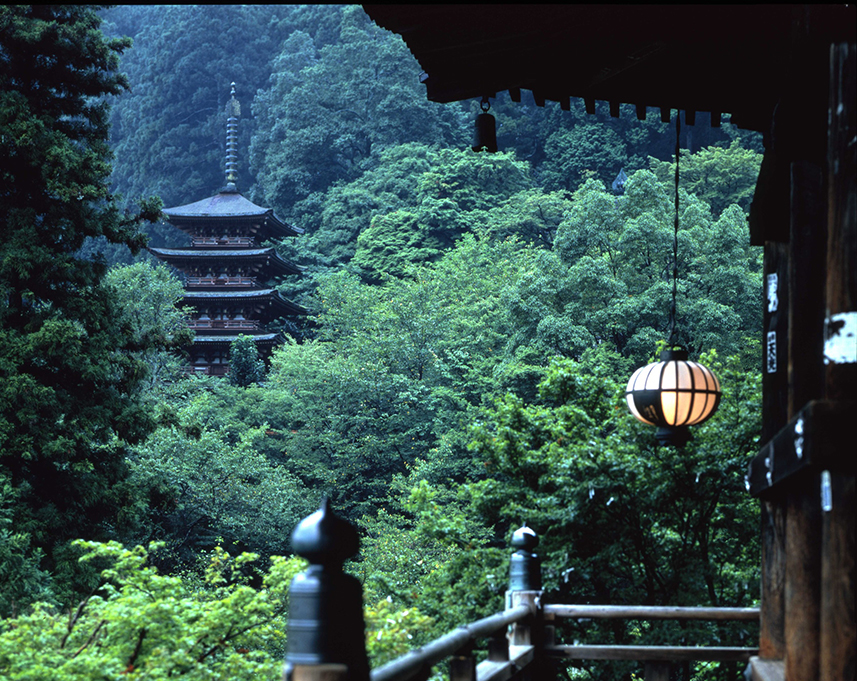 The view is stunning at the top, and the atmosphere is just as sacred as your mind blows. As it's called "the temple of flowers," every season makes Hase-dera Temple different and breathtakingly beautiful. 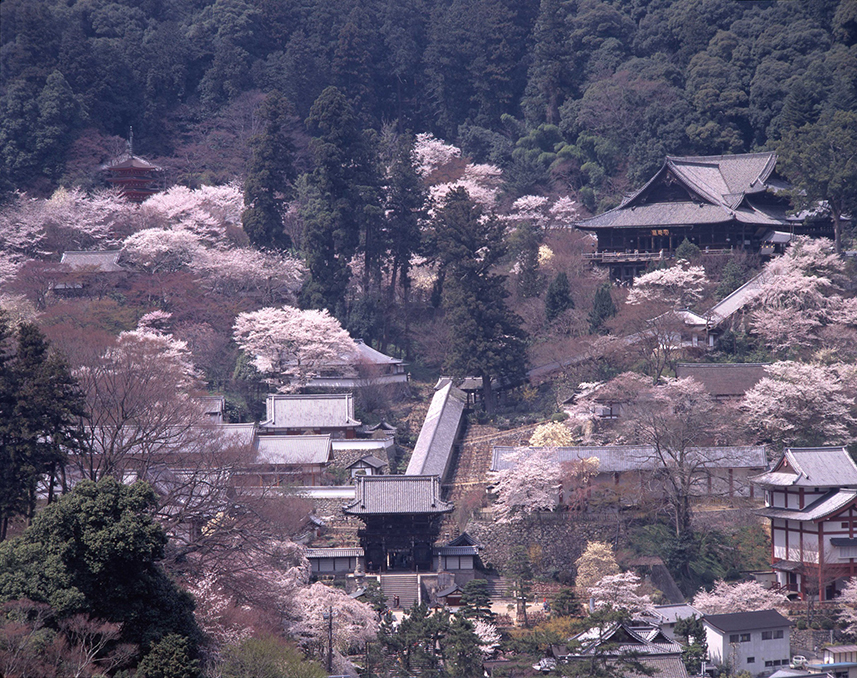 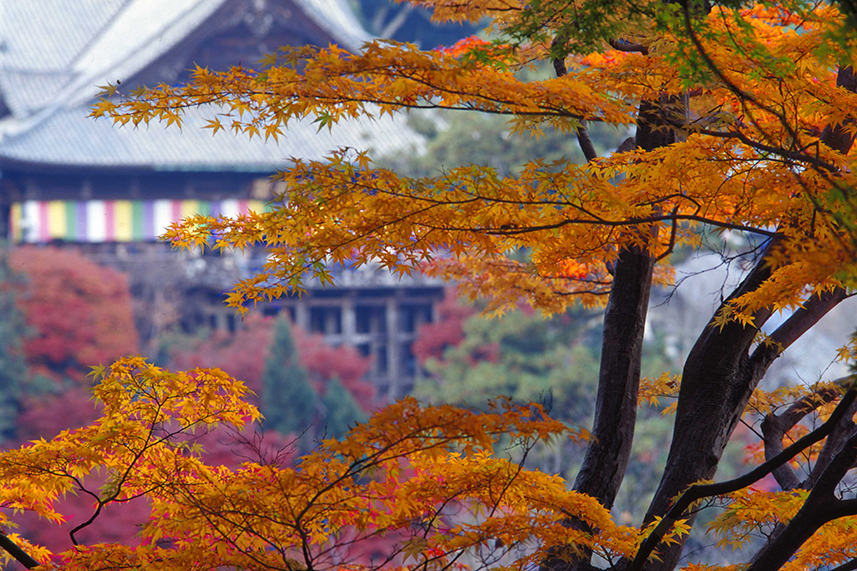 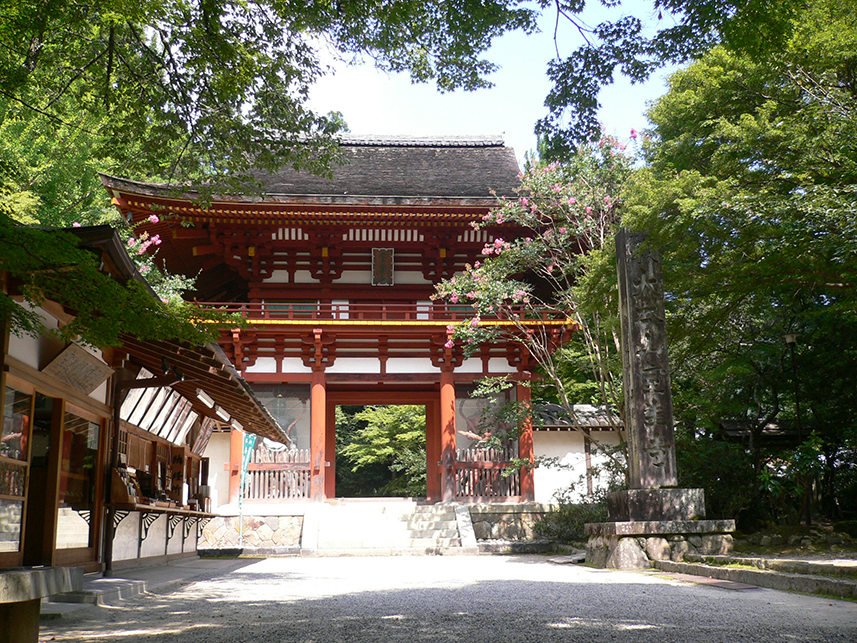 Muro-ji Temple stands on Mt. Muro and was built at the end of the 9th century. It is one of the few Shingon temples to have always accepted women back then. Legend has it that Muro-ji Temple was founded in the forest where the monk named Kenkei visited to pray for the health of Prince Yamabe. After Kenkei had passed, his disciple, Sho-en, chose various buildings and scattered them on the mountain.

The statue of Nyoirin-Kannon (goddess of compassion) dates back from the Heian Period. In general, the Nyoirin are the objects that hold a precious gemstone and wheel in her hands, which grant her an extraordinary power of longevity. 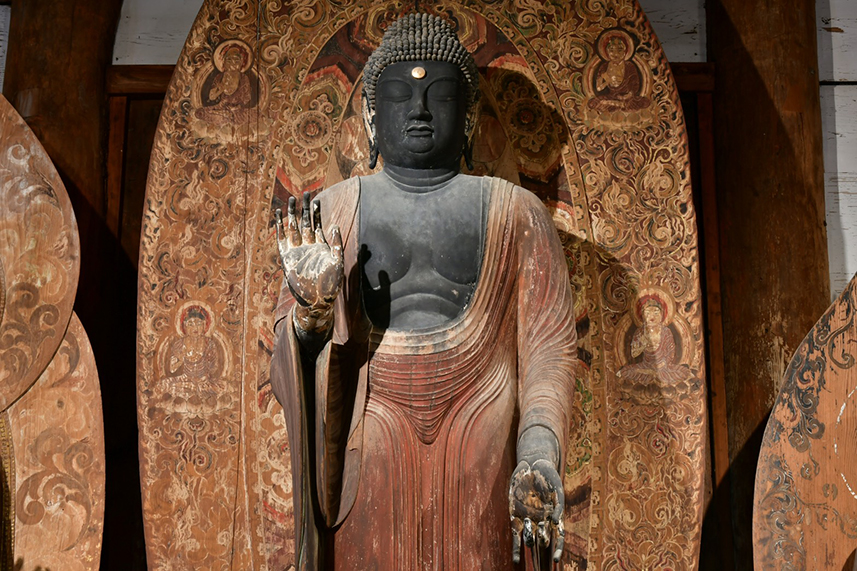 Muro-ji Temple is also famous for its smallest 5-story pagoda. It is only 16 meters high and less than 3 meters wide, making it to the most miniature pagoda in Japan. 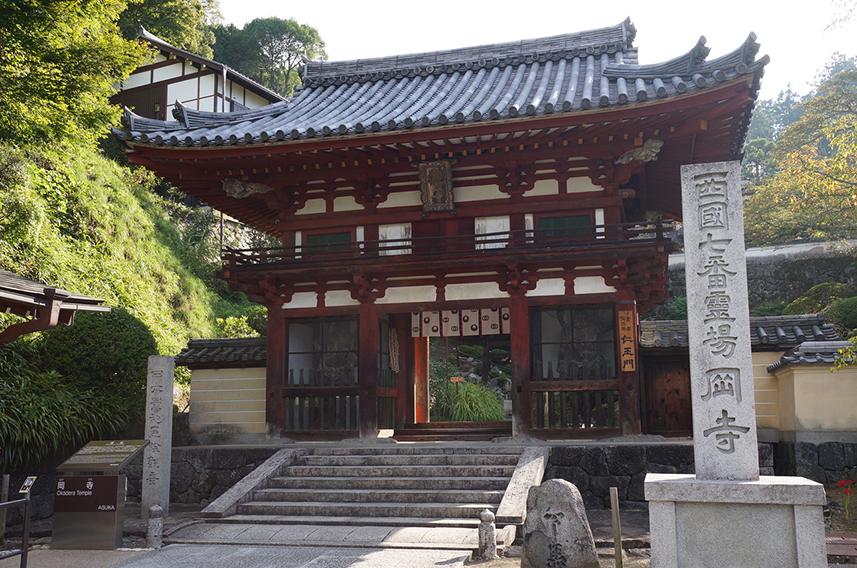 Oka-dera Temple was built in 663, nuzzled into a valley, and surrounded by the forest. Oka-dera Temple is also known as "Ryugai Temple," literally means "Dragon Lid Temple" in Japanese. According to the legend, the people who were desperate for help when a priest named Gien came to save them by praying for Kannon. In the end, his faith and determination resulted in summoning a dragon. The dragon was meek and powerless, especially in front of him, so he quickly coaxed the dragon into a hole in the middle of a pond. Later, he placed a large rock over the top of the hole and imprisoned the dragon for good. 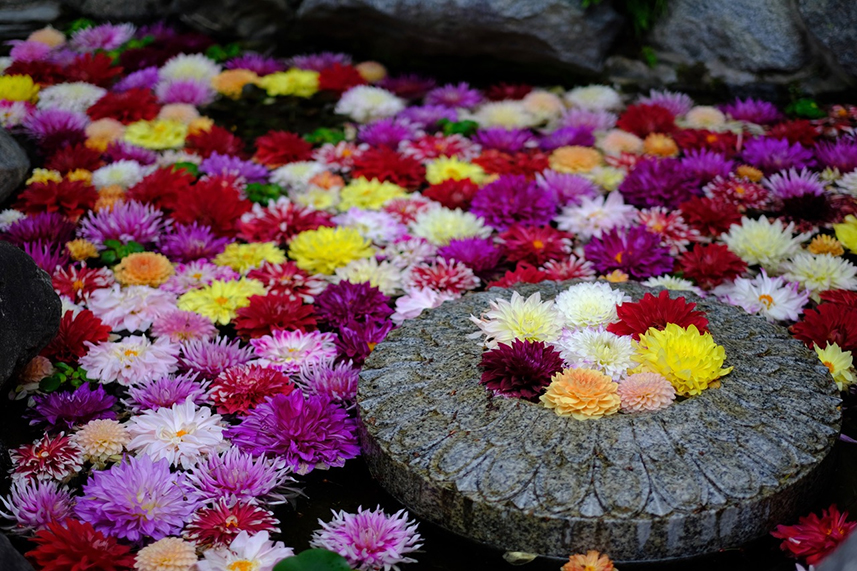 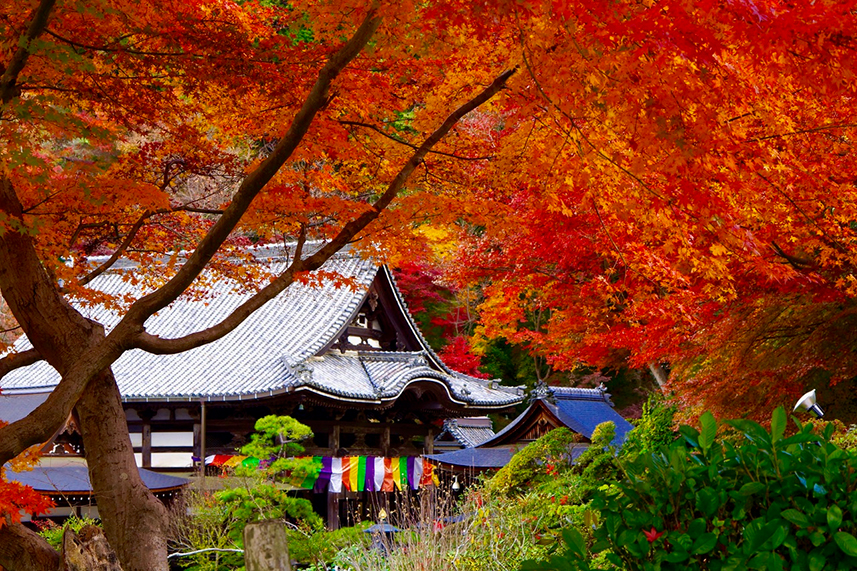 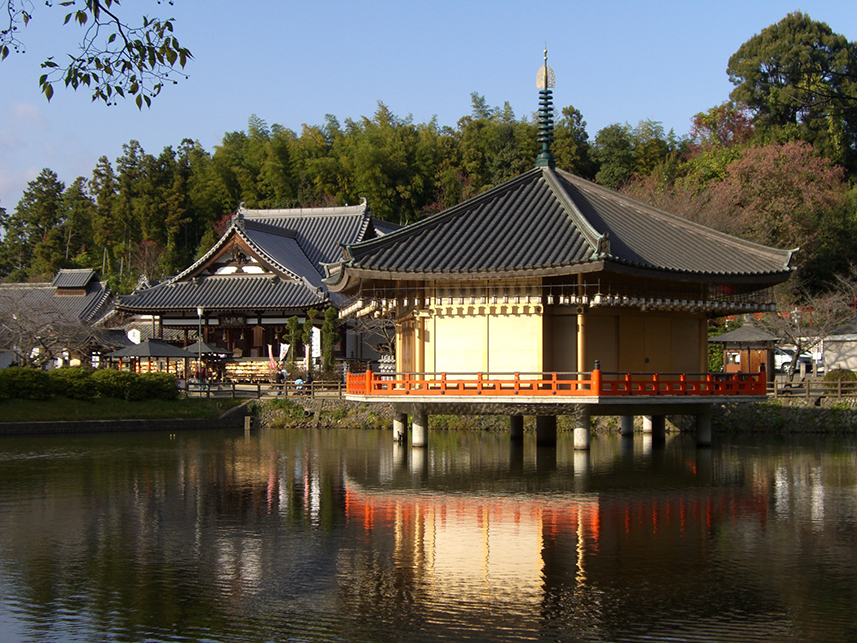 Abe-Monjuin Temple was established in 645 by Abe no Kurahashimaro. The Monju Bosatsu statue at Abe-Monju Temple is 7 meters tall, the giant knight statue in Japan, representing the Buddha of wisdom. It holds a sword of wisdom that cuts through evils in its right hand and a lotus flower in its left hand. As shown in the picture below, the Monju Bosatsu rides a lion crossing the sea accompanied by the four attendants, referred to as "Tokai Monju," literally means "Monju Bosatsu crossing the sea." All of these five statues are National Treasures of Japan. 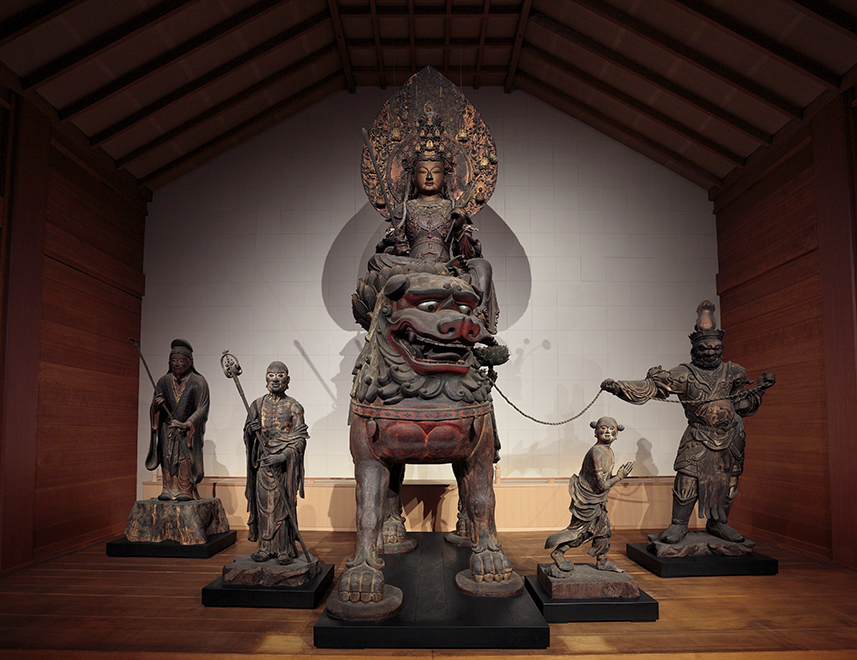 The main temple is one of the Important Cultural Properties of Sakurai City. This temple is also the birthplace of Abe no Seimei, an anathema who was believed to have the psychic power to calm ghosts. Therefore, many people visit the temple and pray, looking for protection from bad luck or evil spirits. 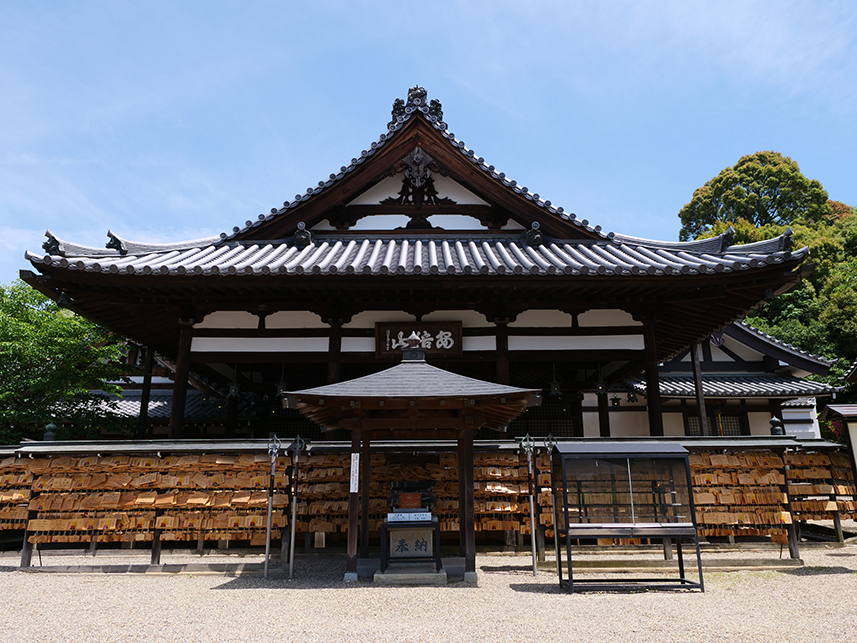 At each temple, the monks of the temples will escort and guide you during your private tour. Throughout this "Nara-Yamato Four Temples Pilgrimage," you will explore the new gateway of historic Buddhism cultures of Nara and take a more in-depth look at the cultural significance of this fascinating pilgrimage.