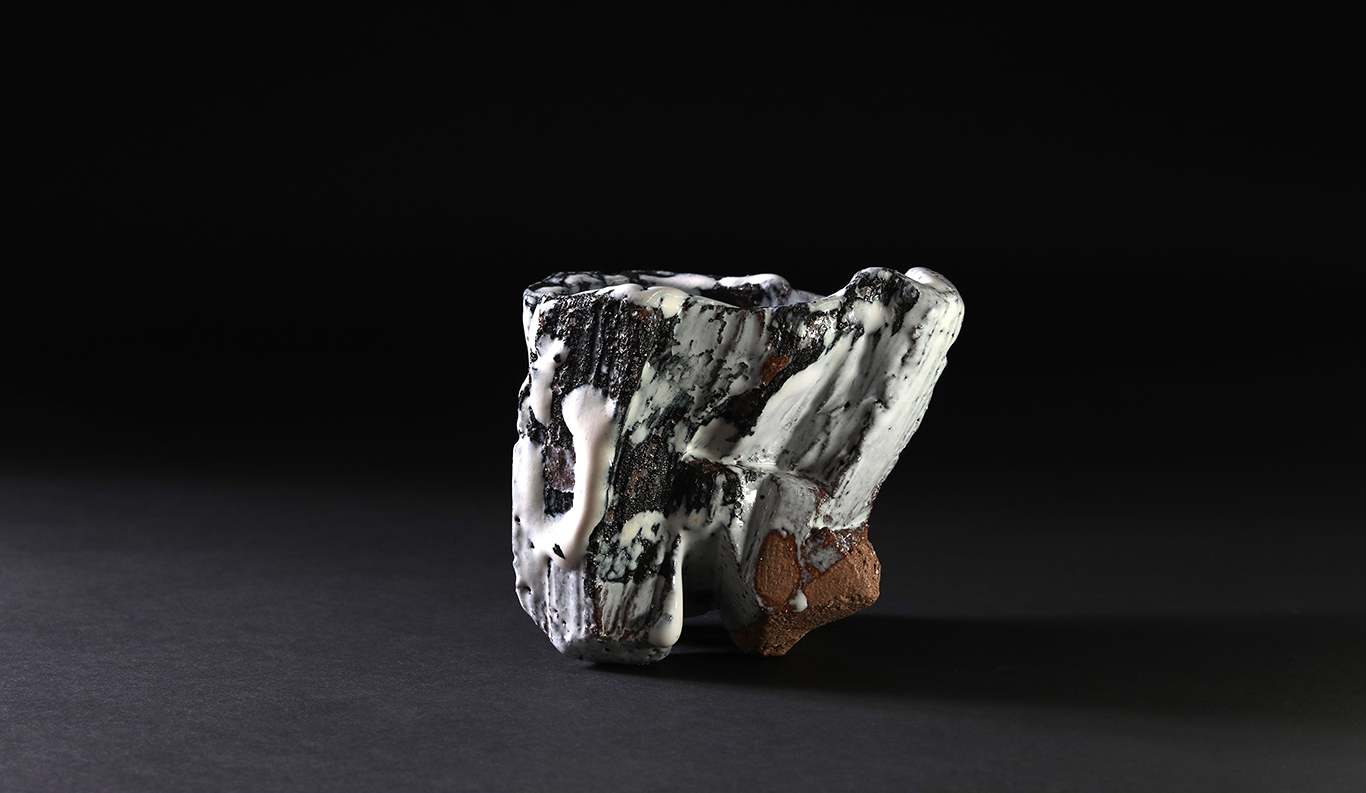 The Awe-inspiring Hagi-yaki Ceramic Artists
The Awe-inspiring Hagi-yaki Ceramic Artists
Hagi City is located on the coastal side of Yamaguchi. Hagi City is well-known for its ceramic industry and has produced many remarkable ceramic artists. The city prospered as a castle town in the olden days; place names related to samurai remain today. The samurai residences still exist in Hagi Castle Town - the lattice windows, white walls, and beautiful city space remain unchanged, blending in with the town and the people.

The history of Hagi-yaki originated when the ceramic potters, Lee Shakuko and Lee Kei brothers, who came from Korea during the Keicho era (1596 to 1615), opened a kiln for the feudal lord of Hagi Domain, Mouri Terumoto, and made korai style tea bowls. It was the beginning of Hagi-yaki pottery. Since ancient times, Hagi-yaki pottery has been awarded as one of Japan's best pottery and has been loved among the tea masters. Since then, the tradition has been passed down from generation to generation for over 400 years to this day. In the best of the best, we introduce three awe-inspiring Hagi-yaki ceramic artists to you. 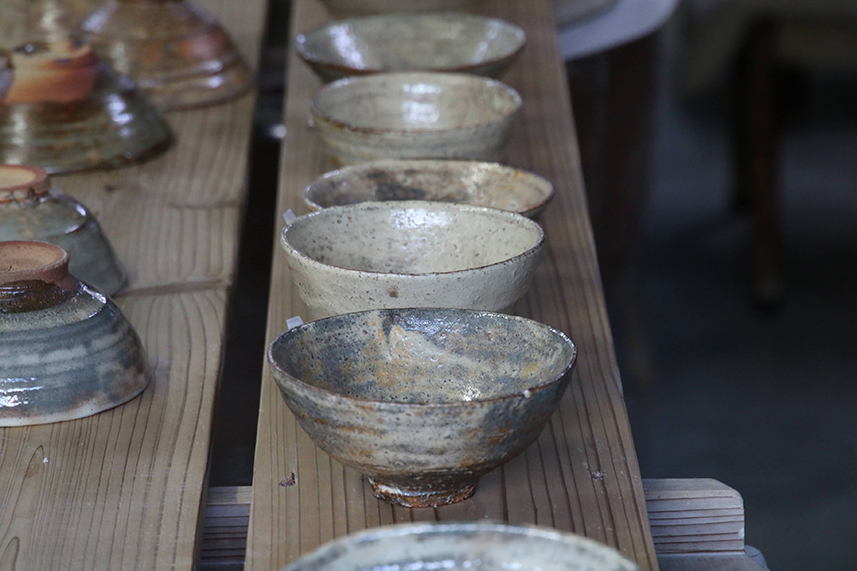 Distance from nearest ryokan: 5 min by car from Otozure

Mr. Masahiro Sakakura is a successor to the Sakakura Family, a sect of Hagi-yaki Ware Fukagawa Kiln, which has nurtured a history of 360 years in Fukagawa. After studying sculpture at an art university and graduate school, he studied pottery techniques for two years in the Kyoto City Traditional Industrial Engineer Training. In 2011, under his father, Mr. Shinbei Sakakura, the 15th generation, Mr. Masahiro Sakakura started making pottery and was eagerly working every day on his skills to cultivate the future of Hagi-yaki ware. 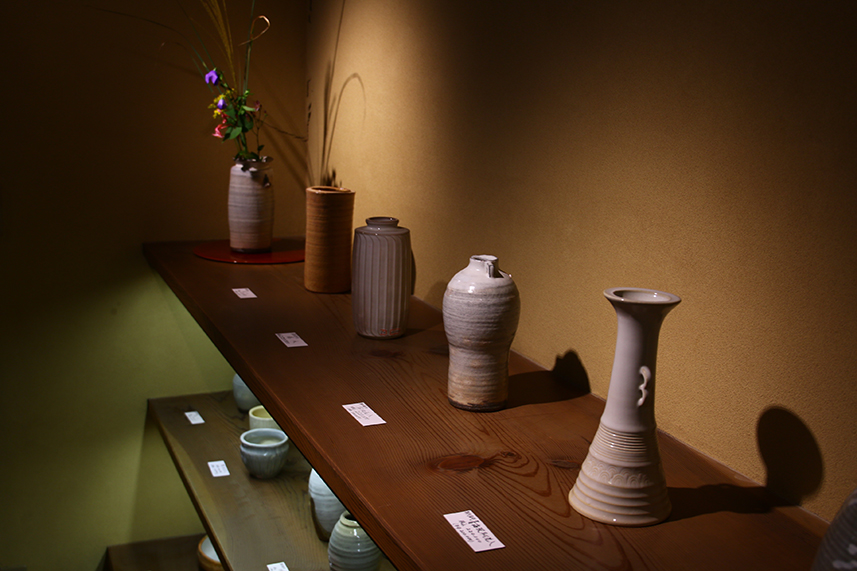 Mr. Masahiro Sakakura indicates the attraction of pottery. "It is interesting that what I did to the soil directly reflects the work. Depending on how you use it, it can give a soft impression or sometimes be a little rough. Each pottery ware is different in vibration and color. Therefore, we try to make it so it could have a strong texture. I'm also fascinated by the fact that you can create the presence of the soil of Hagi by making a relationship between the soil and myself." says Mr. Masahiro Sakakura. Hagi-yaki ware is originally pottery for tea ceremony bowls. The feature of Hagi-yaki ware soil is suitable for tea, and it has been by many tea masters for a long time. It may not be a flashy tool to fascinate everyone for no reason, but Hagi-yaki ware is pottery that can use matcha tea and flowers to the extent. "I find it very fulfilling to make something historic. I feel responsible when I think that I am standing during history, techniques, and materials that had been passed down from generation to generation," says Mr. Masahiro Sakakura. 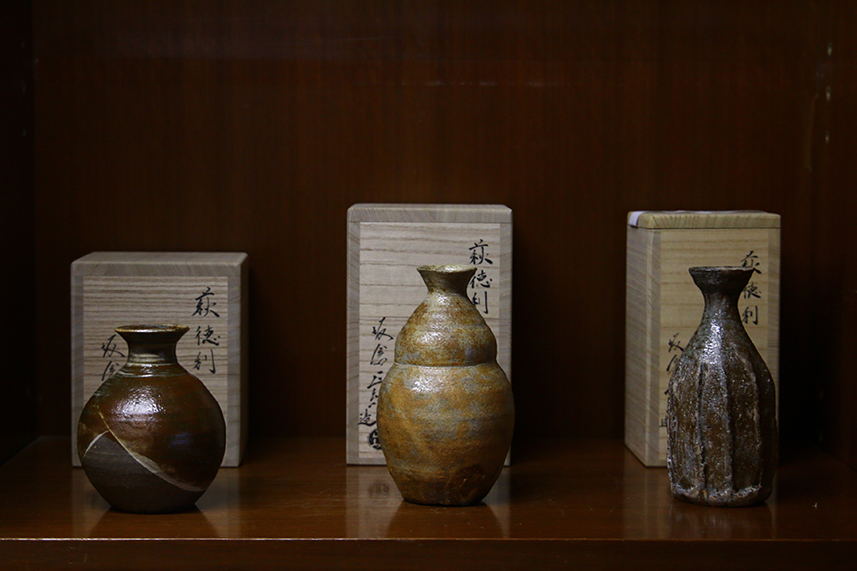 Distance from Otozure: 40 min by car

In 1663, the first Kyusetsu of Miwa Kiln became the kiln of the Mori clan in Hagi. After he moved the kiln to the present location in 1682, Miwa Kiln has been played that role for generations, demonstrating his uniqueness in his work. Even after he lost the backing of the Mori clan in the Meiji Restoration, Miwa Kiln continued to develop the Hagi ware's technique without extinguishing the flame of the kiln. Miwa Kiln's philosophy is to continue the own progress, having respect for their family motto, "Fuso-Jiryu." "Fuso-Jiryu" means, "Do not be influenced by the temporal style but always think essentially about what your job is." It was given by Sanjo Sanetomi, a Japanese Imperial court noble, statesman, and later became the Daijo-daijin (regent and grand minister of state) during the Meiji Restoration. Later, the 10th Kyusetsu (Kyuwa) renamed the Miwa Kiln as "Fusoan" from that family's motto, "Fuso-Jiryu." 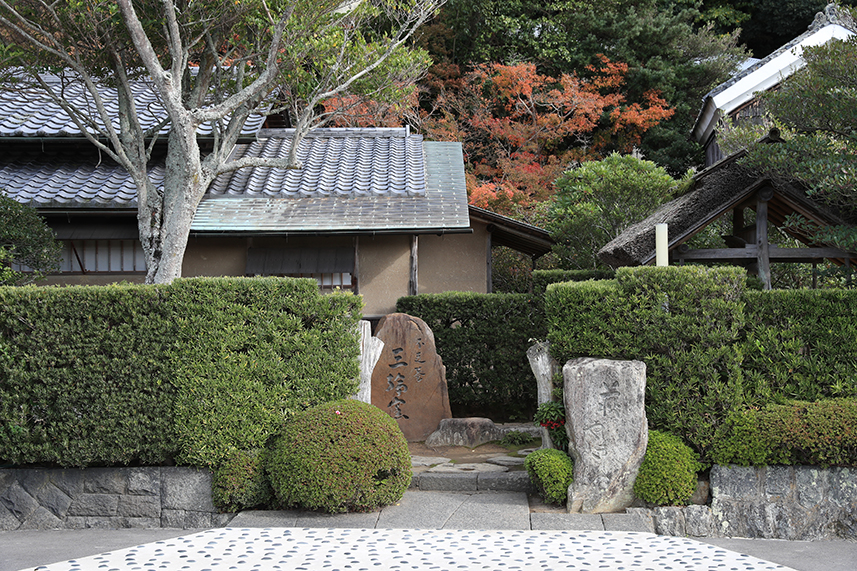 "My grandfather, the 11th Kyusetsu was surprisingly flexible," Mr. Taro Miwa, the first son of the 13th Kyusetsu, recalls. His grandfather believed not all brand-new trends are necessarily alarming. Moreover, he thought that a new approach should be absorbed into pottery occasionally - "The important thing is to face it and be creative, to pass down the new traditions to the next generation," the 11th Kyusetsu said.

Miwa Kiln had been challenged to be creative enough to make unique potteries for generations. You may be able to glimpse a soul in every single pottery ware they create. Typically, the two or three soils found near Hagi are used for Hagi-yaki pottery, whose texture is generally soft and plump. However, the 13th Kyusetsu encountered the soil used for building the pagoda of Yakushiji Temple, one of Japan's national treasures standing in Nara. Using those soils, he created the most extraordinary taste of the Hagi-yaki ware ever. 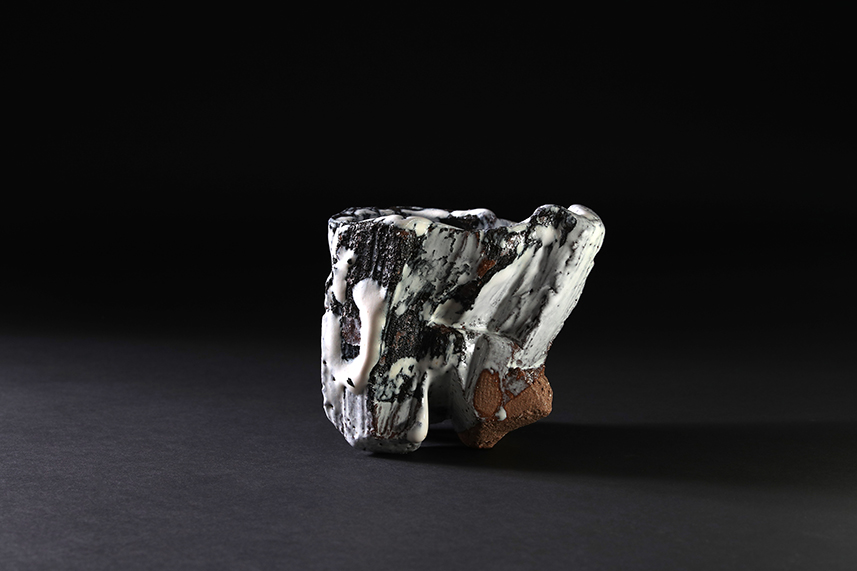 The El Capitan tea bowl shown in the photo above, is the original representative work by the 13th Kyusetsu created with the rusty Japanese sword in recent years. The one issue with using the Japanese sword is the influence of his father, the 11th Kyusetsu. It was made in a unique making method: he pounds 4 kg (approx. 9 pounds) of Hagi-yaki soil with firewood, then cut it with the sword to form and hollow the inside. After drying to get it unglazed, he burns it and applies the glaze on. This special glaze of Miwa Kiln called "Kyusetsu white glaze," developed by the 10th Kyusetsu. It is made by dissolved rice straw ashes, ashes burnt from trees, and powder of the mineral called feldspar. The most important material is the rice straw ashes, the pesticide-free growing rice straws burned by him and his family’s hands. This glaze's initial color is black, but it will mysteriously turn into pure white after burning it at 1,220 degrees. The 13th Kyusetsu has continuously written the new history using the traditional kinds of soil and the glaze originally made by the 10th Kyusetsu.

"The core belief of our work is to feel the life of earth," Mr. Taro Miwa says. Miwa Kiln believes that each soil has a personality, originality, and a soul; therefore, acknowledging each soil as one life, not just material or tool, is essential for creating pottery wares. Generally, people recognize that pottery wares shouldn't be cracked or broken, but soils are supposed to be cut and broken by nature. "We are exploring each other's limits and vice versa, letting the soil pull out our limits. We are establishing an equal relationship with each other," Mr. Taro Miwa stresses. As their family's motto is hung up on their drawing-room wall, Fusoan Miwa Kiln is still innovating while preserving their tradition for many generations. 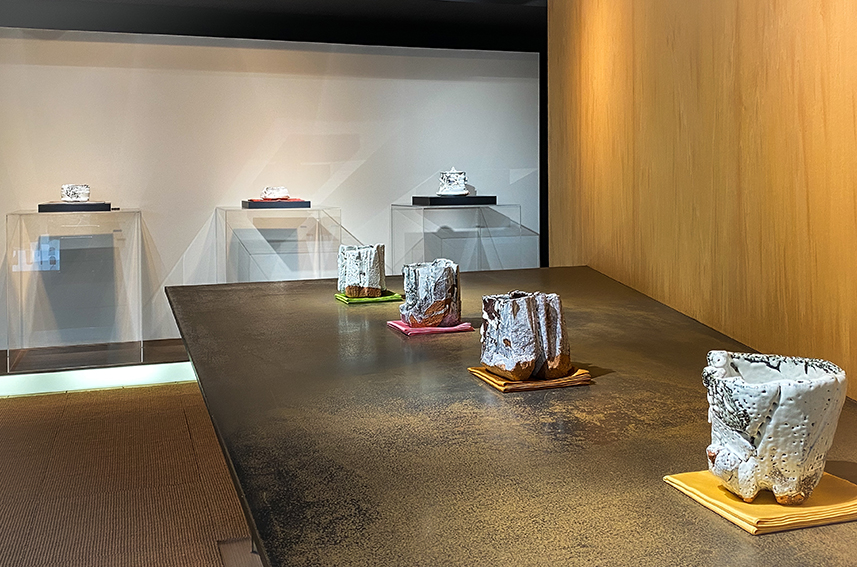 (Advance reservation is required if you wish to visit the gallery or purchase the items.)

Distance from nearest ryokan: 35 min by car from Otozure 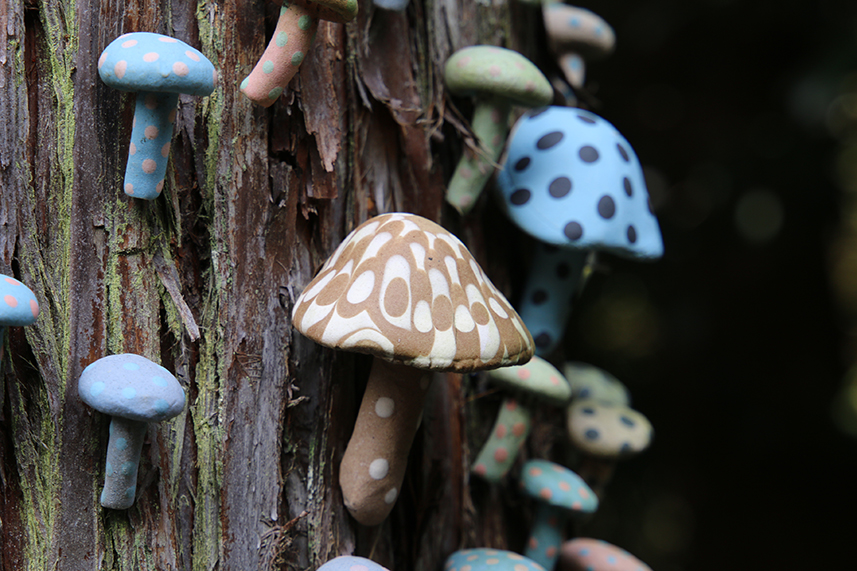 Another unique Hagi-yaki pottery artist is Mr. Tsukasa Kaneko, who invented a uniquely original way of painting art for Hagi-yaki pottery, which is "sumi-nagashi." "Sumi-nagashi" is a technique in which a liquid of full color is placed with a dropper and painted with a natural flow and exquisite vibration. His major ware work is a stripped pottery ware. Another feature is that it looks like pottery because there is no "penetration" in the crack pattern that enters the glaze layer due to the difference between the main body and the glaze, which have different degrees of contraction. Mr. Kaneko's "Mushrooms" is also a Hagi ware art created by the technique of "sumi-nagashi." He studies mushrooms and is intensely inspired by them. You may feel uplifted by the real and captivating beauty of his Hagi-yaki art. 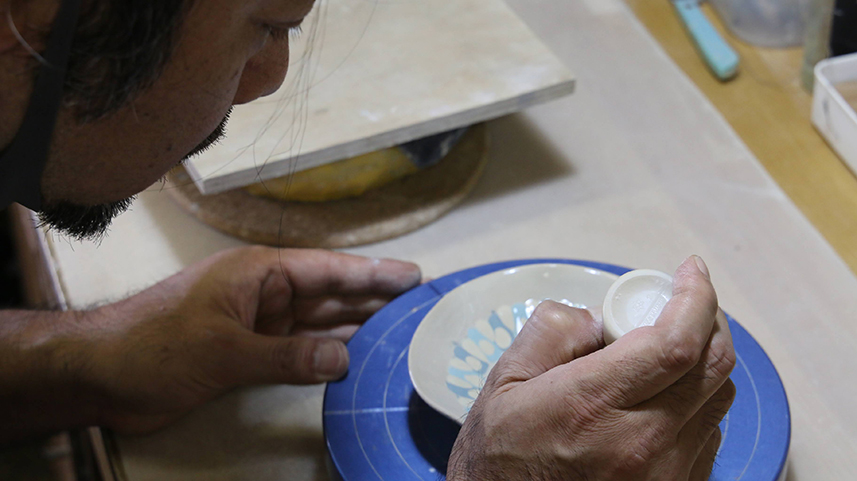 Hagi-yaki ceramic artists had created new works and built a tradition in the history of Hagi-yaki for over 400 years. Remarkably, Mr. Tsukasa Kaneko challenges the unique ceramics that can be enjoyed with the current feeling, such as patterns and colors. His works are displayed and for sale in his gallery and the gift shop at Otozure. Find a container that fits comfortably in your hand while checking the weight, size, and feel of the product when you hold it. 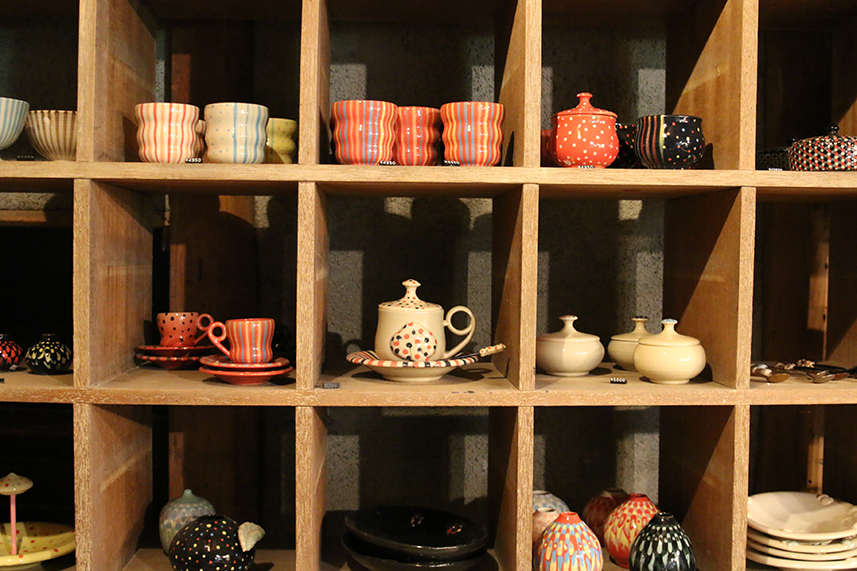