Yamaguchi Prefecture, located at the westernmost end of the main island of Honshu, is known for its beautiful scenery and as the birthplace of the world-famous premium Dassai sake. The region’s Hagi-yaki pottery is among Japan’s most famous. Historically, Yamaguchi had an important role in the Edo era and in bringing Japan’s feudal era to an end with the 19th century Meiji Restoration. The region’s long coastline and location on the Sea of Japan have resulted in centuries of influence from the Korean Peninsula, and it has been mostly spared from damage from the typhoons, flooding and earthquakes that afflict other parts of Japan. Its other coast, on the Seto Inland Sea, is dotted with pretty islands, and its rugged interior is full of beautiful mountains and picturesque gorges.

Venerable brewer Dassai makes some of the finest sake in Japan, using time-tested, centuries-old brewing techniques to ensure the highest quality and its sake’s distinctive flavor.

Hagi-yaki pottery is justly renowned for its beauty and quiet simplicity. The simple, rustic shapes and delicate, translucent colors are prized by tea ceremony masters, as are the changes in the glaze as the cups and bowls are used over many years.

On the way to Otozure ryokan, take the opportunity to sample the local cuisine for lunch. Kawarasoba, literally “roof-tile noodles,” is one of the delicious specialties of Yamaguchi. It is believed to have originated in the Edo period, when soldiers used roof tiles to grill meat. Nowadays, cha-soba (tea-flavored buckwheat noodles), egg, beef and nori seaweed are placed on a heated roof tile and served with a special broth. This dish is famous all over Japan. 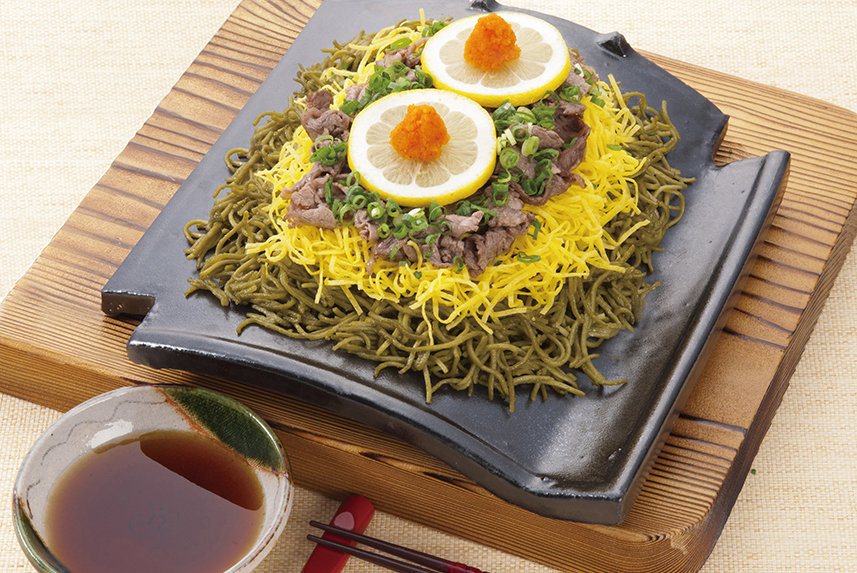 Take a scenic drive to enjoy the beautiful scenery of Yamaguchi. Your next stop is the island of Tsunoshima, sitting prettily in the Sea of Japan. As you cross the elegant Tsunoshima Bridge from the main island, drinking in its stunning views of the clear blue ocean and white sand beaches, you will feel like you are on a tropical island. Amagase Park on the Tsunoshima end of the bridge is a fine place for photos.

Continue on to Higashi-Ushirobata Tanada, an area of terraced rice paddies overlooking the Japan Sea. In the evening, the sight of fishing boats dotting the ocean far below, with their lights shining to lure fish, is unforgettable. 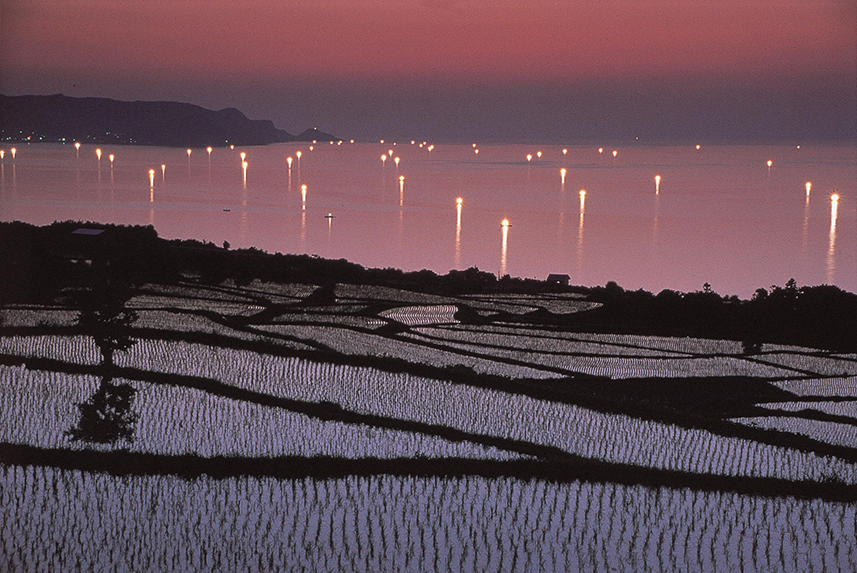 Also nearby is Motonosumi Inari Shrine, famous for its tunnel of 123 red torii gates stretching up a hill from the ocean. It is said that walking through the tunnel of torii brings luck, especially to fishermen, businesspeople and travelers. The shrine is also popular among sightseers, attracted by the spectacular views and striking beauty of the red torii against the lush green and blue of the seaside. 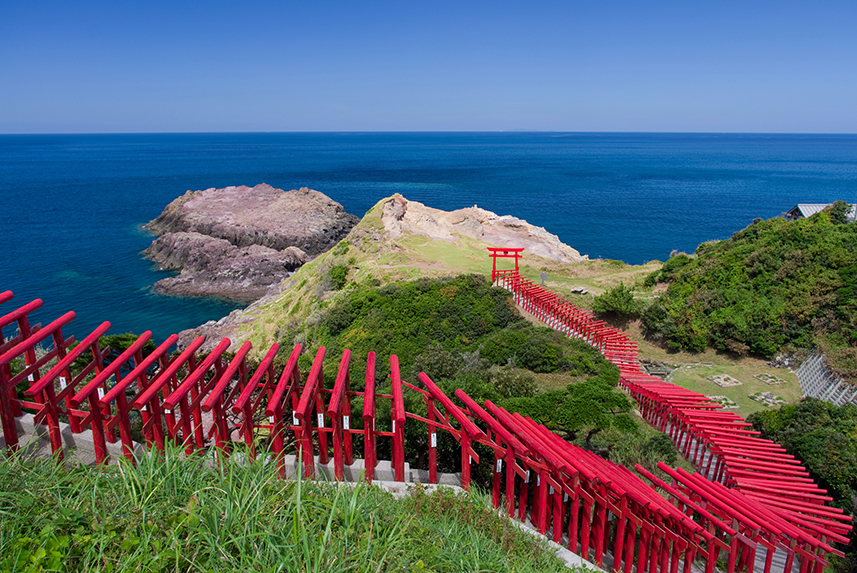 Nagato Yumoto Onsen, the home of the beautiful Otozure ryokan, has been welcoming guests for 600 years, making it the oldest onsen town in Yamaguchi. The Otozure River flowing through the area is the setting for a famous love story – a yuna, or woman working at a tea house, fell in love, but it was in vain; she wrote of her unvoiced love on a tiny strip of paper, and the river carried it away. The spot is now known as a “sacred place for lovers.”

The concept of Otozure is toji – hot spring recuperation – something the town of Nagato Yumoto Onsen has specialized in for centuries. This contemporary ryokan, with only 18 rooms in a huge building, combines the culture of traditional ryokan with the convenience and modern facilities of a Western hotel. 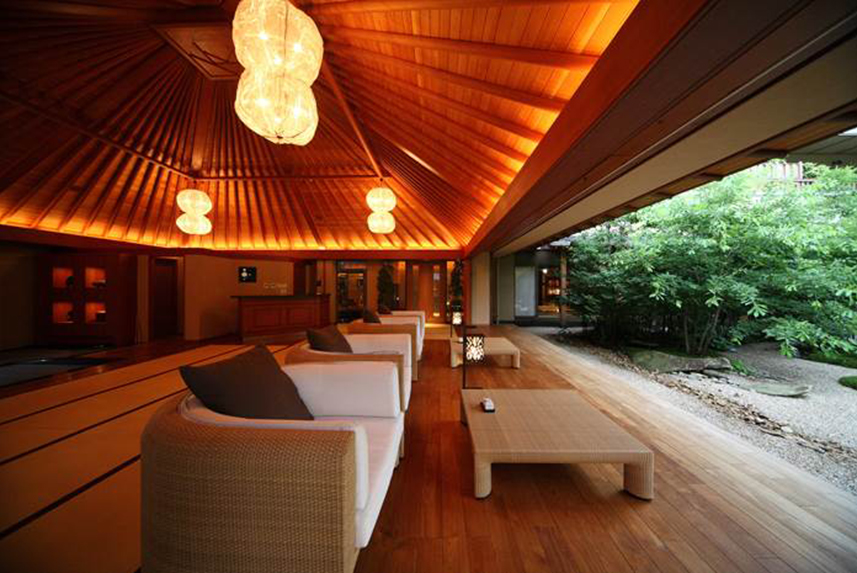 Enjoy Otozure’s outstanding dining – Japanese kaiseki ryori, French cuisine or teppanyaki – and the impressive selection of sake, shochu and wines from around the world. Meals are served on elegant Hagi-yaki pottery.

After dinner, you may wish to stroll outside the ryokan dressed in a yukata (casual summer kimono) to enjoy the fabulous display of stars. Nothing will interrupt your view as you enjoy the panorama of sky ablaze with shining stars. You might also like to check out the domed astronomical observatory at Otani Sanso next door.

After breakfast, you can savor a peaceful moment on a sofa in the ryokan’s entrance hall. Its low ceiling and Japanese garden bring a unique and elegant atmosphere to Otozure.

In the afternoon, you could go on a VIP visit to Hagi Pottery Artisan Studio. The renowned Hagi-yaki is the local style of Japanese pottery and makes an excellent souvenir of a trip to Hagi.

We’ll visit the studio of a renowned Hagi-yaki artist, a 12th-generation master with whom the proprietor of Otozure has a special relationship. You might try making your own Hagi-yaki after strolling around the beautiful city of Hagi.
*Please book in advance for this special tour.

Hagi is a lovely place, with a pretty old town that has some fine old samurai and merchant residences, some of which are open to the public. The city also boasts exceptional museums and art galleries, as well as the ruins of the old castle.

With its many old streets and residences that have survived in their original form to the present day, Hagi is one of Japan’s most beautiful castle towns.

*Activities such as barbecuing on the grassy plain at Senjojiki, scuba diving at Aomi Island and sea kayaking at Yuya can be arranged on request. Availability depends on the season.

On the way to Ube Airport or Shin-Yamaguchi station, you may drop by the Akiyoshidai Plateau, a spectacular place with strange karst topography dotted with limestone pinnacles, and a great place to hike on the numerous trails. The massive Akiyoshido cave, the largest and longest limestone cave in Japan, is also worth a visit – you can hike through it to see the beautiful limestone formations and underground terraces. 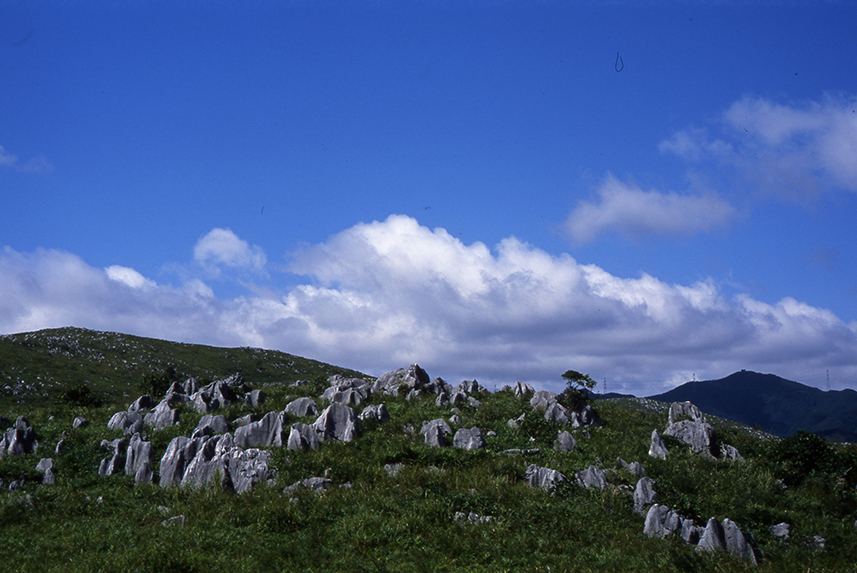 Akiyoshidai International Art Village is another interesting stop on this route. The village’s beautiful buildings, facilities and striking works of art provide a base for artistic activities, including visual art, music, dance and theater.

Continue on to Ube Airport by car and fly to Haneda Airport in Tokyo or transfer to Fukuoka Airport by private car. Otherwise, you may take a shinkansen bullet train to Osaka or Hakata.